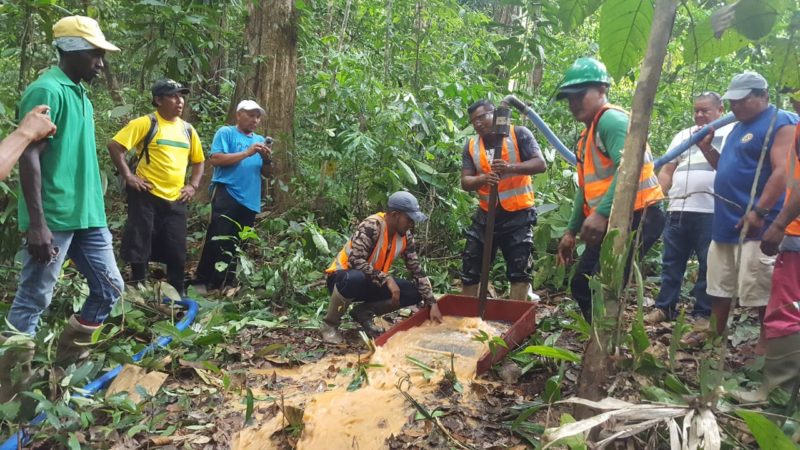 Down the Valley of the Shadow,

‘If you seek for Eldorado!’

Centuries ago, foreign explorers visited Guyana in search of the fabled El Dorado. They sought a city of gold, the holy grail or some other fever dream of never-ending wealth.

Today, Guyana is a country rich in natural resources, including water, forests, wildlife and minerals, and we’re still experiencing an influx of foreigners – attached to major global extractive companies – chasing their own El Dorados.

We are proud of our mineral wealth. As all children learn in school from a young age, the gold in our five coloured flag signifies that wealth and how important it is to the nation.

Foreign investment in the gold sector provides a significant source of revenue for our country. Locally, gold mining employs a great deal of people and many small-scale miners have made their fortunes ‘pork-knocking’.

While we are grateful for the bounty gold brings, we are also wary of the challenges gold mining brings to conservation. Artisanal or small-scale mining is a key driver of deforestation in Guyana. This negatively affects the local indigenous communities that live in popular mining areas and depend on nature for their survival. At the same time, mining provides a key source of income for many of these same people.

How do we strike a balance between income generation and conservation?

CI- Guyana has been supporting Guyana to steer clear of these dangers by working across strong, diverse partnerships to secure gold mining livelihoods and profitability while reducing the impact on forests. Our partners include the Guyana Gold and Diamond Miners Association (GGDMA), the Guyana Geology and Mines Commission (GGMC), the Guyana Women Miners’ Organisation (GWMO), the National Toshaos Council (NTC), the Environmental Protection Agency (EPA), the Ministry of Natural Resources and local communities.

Under our El Dorado Gold initiative, funded by the Norwegian Agency for Development Cooperation’s Climate (NORAD) and Forest Initiative Support Scheme (NICFI), we embarked on a project called Addressing the Drivers of Deforestation (ADoD) in 2016 aimed at artisanal miners.

The ADoD project provided grants to the GGDMA and the NTC to strengthen their capacity to do their jobs efficiently while also ensuring green growth principles, including enhancing resource management and reducing forest loss, were integrated in management policies.

The biggest lesson learned was that many miners were mining blind – that is, jumping straight into mining without doing any exploratory work beforehand. This was both an unnecessary resource drain on the miners and taxing on the environment.

However, as we discovered during the course of this project, an interest in doing things the right way was not only a priority of CI Guyana and government agencies but also of the indigenous villages and miners. This was great news!

Thanks to the willingness of the GGDMA and the NTC, Guyana now has a blueprint for responsible mining. Environmentally friendly standard operating procedures which emphasize efficient prospecting techniques have been established, enabling optimum resource consumption and protecting the forests.

Now miners know they have options to help them assess how valuable an area might be before they spend time, money, food and energy on a mining operation. They save their money and trees are not unnecessarily cleared.

Best of all, however, are the strong partnerships that have been forged. These early diverse partnerships established through the ADoD project have demonstrated the importance of ensuring that spaces are created for private sector, conservationists, policymakers and enforcement bodies, indigenous peoples and communities to engage each other.

Guyana still has a far way to go to achieve its goal of transitioning to a green economy. However, what we saw with the miners and the indigenous communities convinced us that Guyanese want to be empowered to plan for their future in a way that allows them to best manage their resources and secure their own prosperity.

The future looks promising for Guyana, the home of El Dorado!